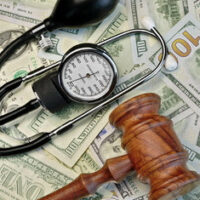 A jury awarded a patient $1.3 million after suffering multiple strokes following a carotid dissection. Carotid dissection means that the artery inside her body was bleeding. The hospital performed a CT scan but did not uncover any problems. The woman’s symptoms appeared to be abating as she was presenting to the emergency room. However, she was still experiencing numbness.

At this point, the hospital discharged the patient without further testing. Several hours later, the patient suffered a stroke. Had the physicians ordered further testing, they would have noticed the carotid dissection. They did not.

Essentially, a carotid dissection is a hole in the artery which causes it to bleed out. If left untreated, the injury will cause a clot to form which will lead to a catastrophic stroke. In these cases, there is a small window to act before the stroke occurs. The doctors should have ordered the MRI to rule out a carotid dissection.

Plaintiffs in medical malpractice lawsuits must prove that the doctor who treated them violated the prevailing standard of care for their profession. So, if most doctors or the medical standard states that you have to rule out carotid dissection when a patient presents with such-and-such symptoms and your failure to do so results in serious injury, then you are liable under the law for all of the patient’s injuries.

At this point, the doctor would be asked the reason why they did not follow up with an MRI to rule out carotid dissection. If their answer did not have something to do with the patient’s condition becoming worse by running the test, chances are good that the doctor deviated from the prevailing standard of care.

Of course, doctors sometimes find themselves in situations where they’re being blamed for something that would have happened anyway. However, that is not the case here. An MRI would have spurred the hospital to address the carotid dissection before it caused a catastrophic stroke. The patient’s outcome was better than you’d expect. She was able to return to work but still has limited mobility in one of her hands. Nonetheless, the patient does not have her full quality of life and could have had the hospital correctly tested for the patient’s condition.

Ultimately, a jury found that the defendant failed to act in accordance with the prevailing standard of care when they did not follow up with secondary testing.

By The Moses Firm | Posted on December 20, 2022
« Jury Awards $5 Million After Diagnosing Pneumonia As The Flu
Misdiagnosis Of Meningitis Cited In Medical Malpractice Lawsuit »
Skip footer and go back to main navigation