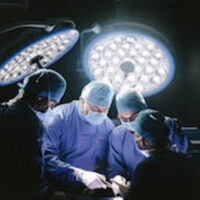 The family of a woman who died after being discharged from surgery filed a medical malpractice lawsuit against the hospital involved and won a $2.5 million verdict from the jury. The 68-year-old patient had gone to the hospital to repair a hernia in her upper stomach. The surgery was performed and the woman was discharged from the hospital. However, over the next two days, a blood clot formed that cut off oxygen supply to major organs. She eventually died.

The family filed a lawsuit against the surgeon alleging that the hospital should have kept the patient overnight to monitor her for clot formation. They were able to convince a jury that the doctor failed to render the prevailing standard of care and were awarded $2.5 million for the wrongful death.

This particular patient had two stents in her arteries and a known complication, vascular disease. The surgeon who performed the hernia surgery failed to consult with the patient’s vascular doctor prior to performing the surgery. The plaintiffs were able to convince the jury that the doctor’s standard of care was negligent and neglectful and he failed to consider risk factors specific to his patient. The patient’s vascular doctor provided testimony on her behalf.

When determining damages in a wrongful death lawsuit, one of the considerations that a jury is asked to decide is the extent of the victim’s pain. In this case, the victim was in extraordinary pain over the course of the two days that she died. The pain was related to multi-system organ failure caused by an undetected clot that had formed after the surgery. Had the surgeon held the patient overnight, they likely would have recognized the pain symptoms, checked the surgical site, and noticed the clot. Because the patient had been discharged, by the time the family was able to get their loved one to the hospital, the damage was already too extensive.

So, while the emotional grief of the family is also compensable in a personal injury lawsuit, the jury can consider the physical pain and suffering of the descendant as well. In this case, it would have been considerable and likely drove up the jury award.

In a medical malpractice lawsuit, a determination is made by the jury as to whether or not the defendant doctor deviated from the prevailing standard of care for the industry. In this case, the doctor failed to consider the patient’s chart, performed a routine procedure that she should have survived, and allowed the patient to die of a preventable complication. A jury determined that the doctor violated the standard of care and was thus liable for the death.

If you have been injured by the negligent care of a doctor, hospital, nursing home, or health care facility, call the Atlanta medical malpractice attorneys at The Moses Law Firm today to schedule a free consultation and discuss your situation in greater detail.

By The Moses Firm | Posted on April 5, 2022
« How to request medical records when you’ve been a victim of medical malpractice
Woman Awarded $6.4 Million In Medical Malpractice Verdict »