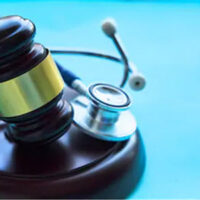 This is a tough case to win, but the plaintiffs did. A motorcyclist who had recently gotten into an accident was rushed to the emergency room. While he was there, he had sensation in his legs. Two days later, he could not feel or move them at all. He is now a paraplegic.

The doctors had performed two spinal surgeries after which the patient was left paralyzed. The plaintiffs blamed the surgeon for taking shortcuts and failing to order necessary scans before treating the plaintiff.

The trial lasted 8 days with the jury eventually siding with the plaintiff and awarding him $17 million for medical expenses, lost income, and reduced quality of life. The plaintiff was awarded $10 million for the loss of his legs and an additional $6 million related to an avoidable stroke.

At this point, the doctor did order an MRI, but the post-surgical intervention prevented the doctor from getting a clear image. The doctor did not order additional testing to look at the area before conducting a second surgery.

The patient is now fully paralyzed from the waste down with no chance of ever recovering movement in his lower extremities.

Damages were related to two preventable injuries suffered during the multiple surgeries. In this case, the patient suffered a worsening of his condition and he suffered a stroke. The paralysis will prevent him from sustaining any employment that requires the use of his legs while the stroke will likely create cognitive problems that impair his ability to concentrate. His life is forever diminished.

If you have been injured due to negligence committed by a doctor, hospital staff, or nursing home, call the Atlanta medical malpractice attorneys at The Moses Law Firm today to schedule a free consultation and learn more about how we can help.