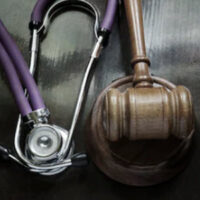 A Georgia teen accused of fencing stolen merchandise died in prison due to alleged medical malpractice, according to a new complaint. The parents of the boy alleged that the medical services carrier at the jail ignored repeated signs that the patient was suffering from cardiac problems. The teen was found dead in his jail cell by prison staff. The family believes that the prison’s medical carrier should be held liable for the death.

More and more states are turning to the private sector to provide services for inmates. These companies are allotted contracts for (in this case) about $20 million per year. In this case, the county decided to stop providing medical services to inmates themselves after five died in short order over a 75-day period. The state began outsourcing to private companies.

These companies are useful to the state because they essentially cap the amount of medical services they provide to inmates. If they are awarded a $20 million/a year contract, you can be assured that the company will not spend more than $20 million a year. Otherwise, their business model would be doomed. However, many believe that these companies are cutting corners to keep their costs low. The companies themselves and their doctors are required by law to afford every inmate with the prevailing standard of care for the industry, something that may not be feasible when you’re operating on a limited budget. Nonetheless, these companies guarantee the state will only be paying so much money and so the states are quite content with the services they provide.

Shortly after his arrest, the teen began complaining of chest pains that appeared to be getting worse. The attending physician’s assistant diagnosed him with heartburn and prescribed aspirin and antacids. As his condition worsened, he was scheduled for a follow-up appointment that was abruptly canceled by the medical service provider. The boy was found dead in his cell. An autopsy revealed that he had a small tear in his aorta which was preventing adequate blood flow to his heart. Had the doctors ordered a simple MRI or chest X-ray, the issue could have been caught and remedied before the patient died. Hence, the medical service provider erred in the standard of care by not ordering expensive testing and letting the antacid do their diagnostic work for them.

Even that went wrong. The failure of the antacid to relieve the patient’s symptoms should have been a sign that antacid was not the proper remedy, but they continued to feed the patient antacid despite the fact that he was bleeding internally. Hence, the family believes that the medical carrier is responsible for the teen’s death because they didn’t want to spend good money on a chest X-ray.

By The Moses Firm | Posted on December 14, 2021
« 40 Women Join Class-Action Against ICE Doctors For Sterilization
How to request medical records when you’ve been a victim of medical malpractice »